An old friend of mine, Steven Driskell, emailed me about Fort Burton's flag yesterday. Here is Steven's email:

"In regards to your Fort Burton post, a New York Times article (attached) mentioned that the rebel flag captured contained the following inscription: "God Armeth the Patriot." Curious about this, I did a Google search and found that a flag with the same inscription was sold at an auction in 2002.
See link: http://antiquesandthearts.com/AW0-10-22-2002-12-27-34

I wonder if this is the flag of Fort Burton? "

It is VERY interesting that this flag would have THE exact wording on the flag as that of the New York Times article. Also, the article confirms it was a "Stars and Bars" flag. Here is part of the story below:

Posted by Stuart Salling at 7:35 AM No comments:

Fort Donelson, Fort Pickens, Arkansas Post, Forts Jackson and St. Philip, Fort Pillow, Fotress Monroe, Fort Steedman and thus the list can go on for a long time of well known forts during the Civil War. Then there is...Fort Burton. There is a serious lack of major academic work on Louisiana west of the Mississippi during the war-but its changing and growing! Fort Burton in Butte-la-Rose, Louisiana is another little piece of Louisiana history that doesn't cross many pages of Civil War books. I found a few images over the past few months while doing "some work " on the Battle of Bayou Borbeau and thought I'd throw them on the blog.

Richard Taylor began contstruction on Fort Burton in late 1862, after he took command of the District of Western Louisiana. In a letter to John C. Pemberton dated 21 November 1862, Taylor said: "I have commenced erecting a work on the Atchafalaya at the Butte-à-la-Rose. This is the only point on that stream at which all the numerous branches and arms unite in one channel. If it can be held, it secures us the free use of the Upper Atchafalaya, and gives us a means of transporting salt, &c., to Vicksburg so long as we control the Mississippi." (OR, vol. 15, p. 873). In another letter to Pemberton dated 20 February 1863 Taylor reported that, "my battery on the Atchafalya at Butte-la-Rose is ready for action." (OR, vol. 24, p. 38).

Images of Fort Burton below. The sateliette images were found online and several of the drawings were from Union regimental histories that served in the area. 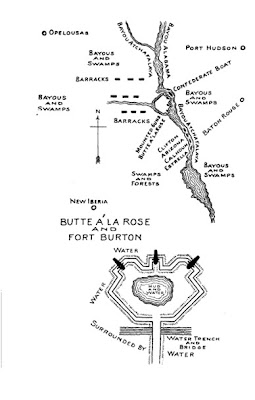 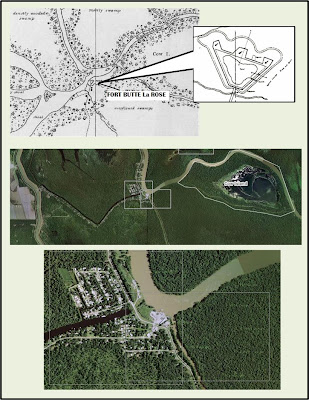 Fort Burton was taken on April 20, 1863 by a small expidition of four ships (Estrella, Arizona, Clifton and Calhous) accompanies by six companies of the 16th New Hampshire. 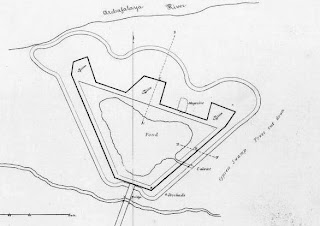 I was sitting at my computer Friday afternoon (actually working on a map) when my silent work was interrupted by loud yells from my daughters, "Daddy! Daddy! Your books are here!". Yes, I have received my bundle of books for Louisianians in the Western Confederacy! It appears they have not quite hit Amazon.com (link to the left of the page) and other sites just yet. Here is a link directly to the publisher's page if interested. VERY exciting moment and looking forward to more in the future.

Currently, there are penciled in speaking engagements at Memorial Hall in New Orleans in the Summer; Camp Moore Museum on possibly a weekend and their reenactment in September; Barnes n Nobles in Lafayette and in the fall possibly at the Shreveport Civil War Round Table. I will post definite speaking engagements for anyone interested.
Posted by Stuart Salling at 9:40 PM No comments: