Dr. Terry Jones of ULM has a piece published at the New York Times' "Disunion" series commemorating the 150th Anniversary of the war. Jones covers the roles of the two Louisiana Brigades that fought at the Battle of Sharpsburg (Antietam for you Yanks). Its a great write up and includes good information on the photographs taken at the battlefield in relation to the dead Louisianians and Colonel Strong's dead white horse.

The Dead at Antietam by Terry Jones

Posted by Stuart Salling at 5:37 AM No comments:

In October 1863 General Nathaniel Banks began his Overland Campaign to march from the New Iberia-Franklin area to reach Texas by land. The plan was to march to Opelousas and from there take the Opelousas-Lake Charles Road to Lake Charles, then to the Sabine River. Once his column reached Opelousas, the advance stalled. One of the regiments on this advance was the 26th Massachusetts Infantry. One of its members, William B. Reed, wrote a letter home while his regiment was camped near Opelousas. Please follow this link to the Acton Memorial Library Civil War Archives. They have posted his letter online (with scans of the original available).

Posted by Stuart Salling at 10:02 AM No comments:

Posted by Stuart Salling at 7:53 AM No comments:

From Vermont in the Civil War by G.G. Benedict, 1888 (p.87-88) we have an account of the arrival of the 8th Vermont Infantry Regiment in Louisiana. The 8th Vermont was recruited to be part of Major General "Beast" Butler's expedition against New Orleans. The regiment arrived at Ship Island in early April and remained for about a month. In early May it was transferred to New Orleans to be part of the occupation force of the recently captured city. From pages 87-88 we pick up with the 8th Vermont's travel up the Mississippi River toward New Orleans:

The passage up the river was full of interest and excitement. The semi-tropical vegetation; the levees, filled to the brim with the vast volume of waters, on which the ship rode high above the rice plantations; the shores strewn with the wrecks of the Confederate gunboats destroyed in the naval fight ; the forts on either hand over which now flew the stars and stripes ; the throngs of blacks along the banks, who hailed the troops with every sign of welcome, — were new and interesting sights to the Vermonters. A little before sunset of the 12th, they first caught sight of the Crescent City, still canopied with smoke from its burned warehouses and smouldering docks. It was filled with multitudes of unemployed workmen and roughs, most of whom made no attempt to conceal their hatred toward the Union troops. The richer and influential citizens excited rather than soothed the passions of the mob. The women were bold and persistent in their insults. The entrance on such a scene was not likely to be forgotten by any of the Vermonters. Colonel Thomas reported to General Shepley, who had arrived two days before and had been appointed military commandant of the city, and in the evening of the 12th the regiment landed, loaded muskets in the street, and marched, to the strains of Yankee Doodle, which drowned the secession songs with which the crowds around them greeted the new comers, to the Union Cotton Press, close to the river, where the regiment was temporarily quartered. They were in a hostile city ; and there was no sleep for the officers and little for the men, that night.' Strong guards were posted and the men felt under little temptation to leave quarters. One man, however," undertook to run the guard, was challenged by the sentinel, and refusing to stop, was fired on and received a wound from which he died three weeks after. On the 17th the regiment was established in permanent quarters in the large building of the Mechanics Institute and in the ad- joining Medical College of Louisiana. 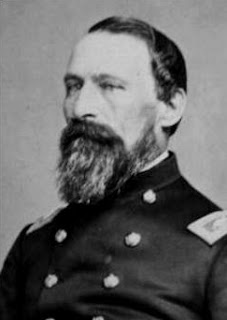 
Posted by Stuart Salling at 6:00 AM No comments:

Following the conclusion of the Overland Expedition during October-early November 1863 there occurred a skirmish at Carrion Crow Bayou. Brigadier General Albert Lee took his two brigade division of cavalry and made a reconnaissance north toward the Carrion Crow Bayou. Lee was supported by First Brigade of the Third Division of the XIX Corps under the command of Colonel Lewis Benedict. The account below from the Worcester National Aegis and Transcript that gave a very detailed account of the skirmish at Prairie Vermillion:

NOVEMBER 12, 1863.
SKIRMISH AT PRAIRIE VERMILLION, LA.
A correspondent of the New York Evening Post, writing from Vermillion Bayou, La., under the date of November 12, gives an interesting account of the skirmish of Prairie Vermillion, in which the celebrated New York brigade of the 19th army corps, Col. Benedict commanding, acquitted themselves most heroically. This brigade, which is composed of the 110th, 162d, 165th, and 173d New York Volunteers, four of the best regiments from the State, had been detailed, with a cavalry division, consisting of two brigades, to support Brig. Gen. Lee, chief of cavalry, in making a reconnoissance of the enemy then concentrated at or near Carrion Crow bayou. The fact that Lieut. Col. Green of the 173d N. Y., who performed a conspicuous creditable part in the affair, is a Worcester boy, (Wm. N. Green, Jr., son of Judge Green,) will give additional interest to the perusal of the following details, in which his action is prominently mentioned:
The cavalry division, consisting of the brigade numbering eight hundred each, started from Vermillionville, to Carrion Crow Bayou, (a distance due north of twelve miles) at 6.30 a. m., and soon commenced running fight then ensued for some eight miles, ending in Gen. Lee charging them vigorously and driving them into confusion into a dense wood. Nim's battery of light flying artillery was quickly brought up, and after shelling the woods Gen. Lee advanced his whole force in line of battle through the woods, and found the enemy drawn up in line of battle on the opposite side of a prairie about two miles in width, numbering as near as could be estimated, about seven thousand. Upon discovering that the enemy outnumbered his force four to one, and having accomplished the object of his reconnioeance, Gen. Lee ordered his cavalry to retreat.
The enemy, discovering his intentions, sent a large force to make a demonstration on Lee's left flank, upon which the general dispatched the First (Col. Lucas's) brigade to protect the left flack, while the General in person remained with the main column on the road.
During this time the New York brigade, having with them Trull's Fourth Massachusetts battery, had marched, (starting at 7.30 a. m.,) through Vermillion, and proceeded to a point about three miles from that place holding themselves in good supporting distance of Gen. Lee. On the march, they captures several stragglers of the enemy. Whilst halting for a brief period, Col. Peck commanding the advance, discovered an important rebel signal station, and sent a detachment of the One Hundred and Seventy-third New York State Volunteers, under command of Lieut. Colonel Green of that regiment, who succeeded in destroying the station, and returned without losing a single man.
Soon afterwards, by direction of General Lee, the New York brigade fell back to large plain, and the One Hundred and Sixty-second and One Hundred and Seventy-third regiments were deployed in line of battle on the right of the road; the One Hundred and Tenth and One Hundred Sixty- fifth on the left; directly in rear of the brigade were the batteries of Trull and Nims, well masked by a dense growth of woods, &c. A column of the enemy soon appeared, coming swiftly down the road, deploying to the right and left; they advanced unsuspectingly, not supposing for one instant that such a storm of missiles was prepared to greet them. Having advanced within good rifle range, the order was given to the batteries to fire, and the enemy was greeted with a tremendous discharge of canister and shell, which made a deep gap in their ranks. They soon brought up a section of artillery, and feebly responded to our batteries for a few moments, which continued to pour destructive volleys into their columns. Seeing it was suicide to attempt to advance his forces in the face of such terrible artillery fire, the rebel general withdrew his forces and made a slight demonstration on General Lee's left flank. They were, however, handsomely repulsed by the first brigade of the cavalry division. They soon retreated back to Carrion Crow Bayou, after which General Lee's whole force returned to their camps.
General Lee's loss was about thirty killed and wounded. The loss of the New York brigade was two killed and five wounded.
The loss of the enemy is not definitely known, but their loss is supposed to have been very large.

Posted by Stuart Salling at 6:00 AM No comments: