"No Man's Land": The land between Opelousas and Lake Charles proved to be a difficult country for Confederate authorities. Ville Platte or "Flat Town" is highlighted because it did not appear on the origianl map. (Source: OR Atlas, Plates CLVI and CLVII).

I came across two pieces about Jayhawkers in Southwest Louisiana this week and thought I'd put them on the blog for everyone to see. I did a little more work and found that Mr. W.T. Block has done some exceptional work on this topic. Mr. Block's work focuses on Texas units and their role in the war. He has done some outstanding work on the Texas units that fought in Louisiana. This explains why he has taken an interest and done some great work on the Jayhawking of Southwest Louisiana. Basically, the area between Opelousas and Lake Charles was sparsely populated (look at the size of those parishes in 1860-they had to be drawn big for a large enough population to compose the parish). While thousand of Texas served from Alexandria to Vermillionville areas the roads between Opelousas and Texas was filled with furloughed soldiers, supply wagons, etc. The country was great, though, for deserters and pro-Unionist to operate and became a "lawless" region.
Here are two articles written by Mr. Block on Southwest Louisiana Jayhawking. Both articles are very well documented to provide you with more leads for research:
"Some Notes on the Civil War Jayhawkers of Confederate Louisiana."
"Calcasieu Parish, La: Hotbed of the Civil War Jayhawker."
Below I have put two contemporary stories about the Jayhawkers. The first is from the Houston Tri-Weekly Telegraph, August 29, 1863:

The Opelousas Courier, August 15, 1863:
"On Sunday last, a company of mounted troops, joined, it appears, by some citizens, started in pursuit of the jayhawkers, and when arrived in their quarter, dismounted and leisurely laid down, waiting for something or other, when, all at once here come the jayhawkers pouncing upon them and throwing dismay among the crowd. Firing commenced, running too commenced, and from what we can learn we had one man killed and several wounded, one of whom has since died. We know not the loss of the othe side..."
This is an article from Harpers Weekly, December 19, 1863, commenting on captured orders from a Confederate officer that were issued by Alfred Mouton:

THE TERROR AT THE SOUTH.
THE following letter comes to the Lounger from an officer of one of the New York regiments in the Army of the Gulf. The revelation of the suffering of faithful American citizens under the fierce terrorism of the rebellion is startling. The rebel General Orders which our correspondent incloses, and which follow his letter, were found upon an officer of the rebel General Mouton's brigade, captured by a detachment of Major-General Washburn's division, near St. Martinsville, south of the Red River. They show how desperate is the resistance made by Southern men against the "Confederate Government," and how earnest their hate of the "liberty and independence" proffered them by a slaveholding oligarchy:
CAMP AT VERMILION BAYOU, LOUISIANA, November, 1863.
To the Lounger:
The circular which I inclose will tell you its own story, and will be allowed, I hope, to appeal through you to the sympathies and faith of a hundred thousand loyal men
and women. Were there no other evidence existing of loyalty in rebellious Louisiana—of true, tried, unswerving loyalty, which lives and has its being, even though hunted, persecuted, and massacred by such incarnations of traitorous hate and cruelty as Sterling Price, Richard Taylor, and Alfred Mouton—this circular would nevertheless triumphantly prove the fact.
Are there, Mr. Lounger, among the worthy people whom you visit weekly, some who have never felt the burdens of the war, save as the tax-gatherer has knocked more loudly at their doors, and who have never felt the bitter afflictions of the war, save as they have mourned the decline of gold, and yet who have complained loudly of its hardships? Are there haply those whose faith that the old Union ship must yet outride the storm has wavered, and whose hearts have grown apathetic, even beneath the peaceful shelter of the Old Flag? If such there be, let me ask them to read and learn how the Wittingtons, the Ozimes, the Carrieres, the Huddlestons, of Louisiana, have been made the victims of a relentless and cold-blooded persecution; hunted through the swamps and brakes of their State: proscribed, outlawed, murdered in secret, because—and I would that it might be blazoned in characters of fire before Copperhead eyes—because they could not lift the traitor's hand against their beloved country! Honor, thrice honor, to these gallant spirits! The soul of all the Army of the Gulf cries out to them in sympathy and encouragement.
This circular has probably been prepared for distribution to the people of the State, and has, undoubtedly, the authority of our Generals in this Department.
Yours in loyalty.


GENERAL ORDERS.—No.—
HEAD-QUARTERS, FORCES SOUTH OF RED RIVER,
VERMILIONVILLE, June 12, 1863.
Information has been received that there are bands of outlaws, deserters, conscripts, and stragglers from a point above Hineston, on the Calcasieu River, in the parish of Rapides, down to the lower parishes, extending into the parishes of Calcasieu, through to the Bayou Teche, which are committing depredations, robberies, and incendiarism, and who are openly violating the Confederate laws, with arms in their hands. Such men can only be considered as outlaws, highwaymen, and traitors.
In consequence:
I. You will proceed with your battalion up to the Calcasieu River, and in the vicinity of Hineston, in the parish of Rapides, and from that point scour the whole country to the outer limit of Calcasieu Parish, if necessary, to the Bayou Teche, in search of these outlaws, highwaymen, and traitors. These bands, beyond the pale of society, must be exterminated, especially the leaders; and every man found with arms for the purpose of resisting the operations of the Confederate laws, or against whom satisfactory evidence may be given, must be executed on the spot.
No prisoners should be taken. Such as are not sufficiently guilty to deserve immediate execution must be liberated, and, if conscripts, ordered to report forthwith. Men by the name of Wittington, Elliot, Ozime, Carriere, Huddleston, have been designated as some of the ringleaders.
By order of Brigadier-General ALFRED MOUTON:
LOUIS BUSH, Assistant Adjutant-General,
To Major G.A. FOURNET, commanding Yellow Jacket Battalion.
These instructions are to be kept secret, and no one is allowed to know the objects of your movements except yourself.
True copy:
LOUIS BUSH, Assistant Adjutant-General.
Lieutenant G. J. DEBLANC, Acting Adjutant.
Ozeme Carrier: Jayhawk Leader in Southwest Louisiana (Acadians in Gray) 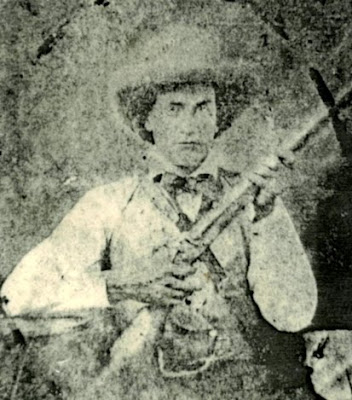