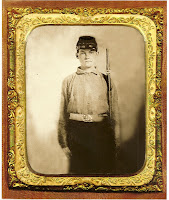 Above is a photo of Henry Hartner Rist of the 16th Louisiana Infantry, Co. A.
(Rist's Photo can be found at the United Daughters of the Confederacy, Fort Fisher Chapter)
Henry Rist joined the East Feliciana Guards in 1861. He and his company were sent to Camp Moore in the Summer of 1861 and on September 29th the East Feliciana Guards became Company A of the 16th Louisiana Infantry. Once formed the 16th Louisiana moved to New Orleans and remained part of that city's garrison until early 1862. To meet U.S. Grant's quick strike into Tennessee in February-March of 1862, the 16th Louisiana was dispatched north as part of Daniel Ruggles' Brigade. Ruggles began leaving New Orleans with his brigade (16th, 17th, 18th, and 19th Louisiana Regiments) on February 14th. The 16th Louisiana traveled by rail through Jackson, Canton and Holly Springs, Mississippi before stopping in Tennessee. By early March the regiment was sent to Corinth. Once there, Ruggles was given orders to organize the units at Corinth into a division to be placed under his command. The 16th Louisiana was attached to Ruggles' Second Brigade, which was placed under the command of the 16th Louisiana's own Colonel Preston Pond. For the upcoming Shiloh Campaign, the 16th Louisiana was placed under the regiment's Major, Daniel Gober from Ville Platte, Louisiana.
For the majority of the first day of Shiloh (April 6th) Pond's Brigade covered the left flank of the Army of the Mississippi. The most fighting the brigade saw prior to 4:00 P.M. was friendly fire from part of Trabue's Brigade. At about 4:30, Pond was ordered to attack the reformed Union line behind Cavalry Field. This was Major General John McClernand's last line along the Hamburg-Savannah Road. Pond's Brigade was sent in rather haphazard fashion and the three units that Pond had with him (16th Louisiana, 18th Louisiana and the Orleans Guards Battalion) were sent in separately and were decimated by superior numbers. Of the three units, the 16th Louisiana lost the fewest but one of its casualties was Private Henry Rist. Rist was wounded in the left leg in the charge. It was a wound that eventually led to his discharge from the army on June 19, 1862.
Posted by Stuart Salling at 6:00 AM