New Book out on the Tiger Rifles 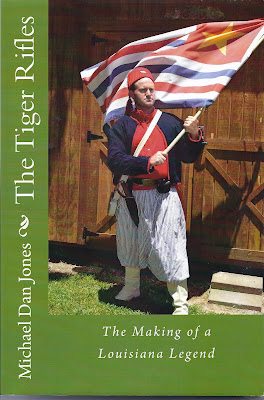 The Tiger Rifles by Michael Dan Jones
Michael ("Mike") Dan Jones of Lake Charles, La. has written a new book titled, The Tiger Rifles: The Making of a Louisiana Legend. If you click on the link it will bring you to the site to order his book. I asked Mr. Jones to elaborate a little on the scope of the book and why he chose the Tiger Rifles:

"As to the book, it is a history of the Tiger Rifles, Company B, 1st Special Battalion (Wheat's) Louisiana Volunteers. Because of their flashy zouave uniforms, their famous battalion commander, Major Roberdeau Wheat, and their heroics at First Manassas, their nickname, Tigers, became attached, first to the battalion, and then to all Louisiana troops serving in the Army of Northern Virginia. I especially tried to separate fact from myth with regards to the Tigers. They became so nortorious for their antics in camp, they got blamed for a lot of things that weren't their fault, although they did plenty on their own to deserve their reputation. I especially looked into the possible real identity of their notorious commander, Captain Alexander White. His name is an alias but as far as I know, his real identity has been a mystery. Also I brought together some information on the wealthy businessman, A. Keene Richards, who gave them their zouave uniforms. I tried to keep the focus tightly on the men of the Tiger Rifles and bring them to life as much as the limited resources allowed. I feel like I accomplished my goal."

Posted by Stuart Salling at 7:50 AM