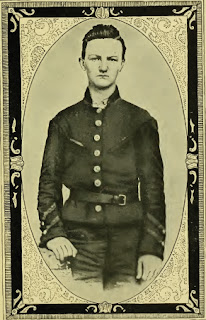 
In the piny woods of Tangipahoa Parish there is a certain old field neglected and overgrown with pine bushes. Thousands have seen it from the passing trains of the Illinois Central without suspecting that it was the site of a great military encampment in the stormy days of '61. Here Camp Moore, named after the governor of Louisiana, was located. Hardly could a more appropriate place for the purpose have been found seventy-five miles from New Orleans, sufficiently rolling for easy drainage, and level enough for military evolutions. Situated as it was in the ozone belt, the air was pure and sweet, and redolent with the odor of fresh pine straw. On one side was Beaver Creek and on the other the Tangipahoa River, both running streams of clear sparkling water.


Here the sons of Louisiana went to enlist in the army and to be trained in the duties of soldiers. When the war began these sons knew nothing of drilling, guard mounting, and many other duties which alone make men efficient in the camp and on the march and the battle field. Camp Moore was established by the state to provide this instruction. In a word, it was a real military school in which men were trained for war and formed into battalions and regiments. In this school they were kept usually six or eight weeks and then forwarded to the "front," where the fighting was to be done.


As green and awkward as the Claiborne boys were with respect to drilling, there were three things in military life they could do as well as the drill master: shoot quick and straight, put up tents, and march in "route-step" (go as you please). They marched in this go-as-you-please style from the depot to the camp, a large drill-ground in front of "a little city of white tents." The grounds were as smooth as a floor and as clean as a newly swept yard, and the white tents were arranged in straight parallel rows. Everything seemed to have been designed and finished with a single eye to order and cleanliness. Here and there on the campus were squads of soldiers, each being drilled by an officer who was as straight as an Indian and as " bossy as a new overseer." " Shoulder arms!" "Forward, guide right, march!" "Company, left half wheel, march!" The welkin rang with these and other commands, each having something of the clear crack of a rifle.


When the Rangers received their tents they at once put them up in two rows, facing one another, and Captain Scott said, "They look as .well as any on the grounds." The next day officers were elected, and the company mustered into service for one year. Then they drew guns all kinds, scarcely any dozen of them being of the same pattern. Thus equipped, they entered upon all the duties of soldiers; namely, drilling, guard mounting every morning, dress parade every afternoon, policing, inspections, cleaning quarters, washing clothes, drawing rations, cooking and eating the frugal meals.


When a regiment was formed and sent to the "front" its place was soon filled by new companies coming in from all parts of the state. A few of these were Irish, more French, and still more English. Ten of the English companies from North-Central Louisiana, including the Claiborne Rangers, were formed into a regiment, known as the 12th Regiment, Louisiana Infantry. Of this regiment Captain Scott, of the Rangers, was elected Colonel.


The 12th was formed of a thousand young men stalwart, muscular, dauntless hobbledehoys. They were the sons of lawyers, doctors, business men, and farmers, and having been reared largely in Christian homes they had that pride and morale which make men towers of strength in peace and in war. Of  course their military potency could not be estimated before training and trial, but there was the assurance in advance that "blood will tell"; for there flowed in their veins the blood of the heroes of Hastings and Marston Moor, Valley Forge and Yorktown, Horse Shoe Bend and New Orleans, Buena Vista and Chapultepec.


It was a short walk from camp to the Tangipahoa River, and early in the morning and late in the afternoon the soldiers were permitted to go there to bathe and swim. This was much enjoyed by all, and every day the river was lined with the jolly and noisy swimmers. Indeed, throughout the war, the range of their pleasures being so narrow, the men went in the creeks, mill ponds, and rivers whenever they had a chance, even in pretty cold weather, that being about their only pastime. They often took their soiled clothes, washed them, and spread them on the bushes to dry, while they bathed and played in the water.


It was at Camp Moore that Nick learned to swim. That was queer, for, as a rule, Louisiana boys take to water almost as soon as they can walk. But after that, Nick made up for lost time by swimming in, if not across, nearly every stream between that place and the Atlantic Ocean.


As a rule, it was only the rowdies who had to be treated in this way. The men generally did their duties cheerfully and faithfully. As the war progressed the roughs, rowdies, and bullies gradually "played out." It is men of moral courage that make dependable and enduring soldiers. Hence punishments became fewer as the war went on.


There was an Irishman in the llth regiment named Kelly, who was punished for drunkenness by being put under guard with a chain and ball attached to his ankle. Kelly had been a steamboat roustabout, and was a giant in size and strength. Nick happened to be on guard that day and had to guard Kelly. Now the big Irishman, moved by a spirit of humor or desperation, seemed to be watching for a chance to spring on Nick and beat the life out of him. So every time he moved down would come Nick's gun. It was loaded with an ounce ball and Kelly knew it. When the corporal of the guard came, Kelly said to him in a whisper: "Would ye be after putting a man in the place of that spalpeen of a lad? The little cuss has got so he won't let me turn over."


Nick was as glad to go as Kelly was to have him go.


Exposure and other causes produced much sickness among the troops. At the beginning of the war each camp was supplied with a hospital in which the sick were cared for. In it were clean beds, medicines, and nurses, and many ladies came with flowers and delicacies for the patients. But year by year, as the war went on, camp hospitals became poorer and the medicines scarcer, until they really disappeared altogether. At first the chief kind of sickness was measles, which is usually a harmless disease, but a very fatal one when the subject is exposed. More men died of it during the war than of all other diseases together. It caused the death of more than a dozen of the Claiborne Rangers at Camp Moore.


Many of the bodies of deceased soldiers were taken to their homes for burial, and the rest were interred on a mound in the woods nearby. The latter were buried with military honors; that is, the remains were escorted to the graveyard by a squad of soldiers, and when the body was put in the ground the
squad fired three rounds of blank cartridges over the grave. It was a very sad and impressive service.


The site of Camp Moore is now an old and deserted field. All signs of the camp are gone. There is nothing left to remind one of the stirring scenes of '61. Instead of the merry laugh and heavy tramp of soldiers, one now hears the "mournful song" of the pine straw as it is swept by the passing breeze.


Many years after the war the Daughters of the Confederacy induced the legislature to appropriate enough money to buy the old graveyard, clean it off, build a strong iron fence around it, and erect a monument in memory of the men, living and dead, who served there. When the monument was unveiled
(1907) Nick, then a professor in the state university, made the dedication speech.


Two large beech trees were left standing in the inclosure on account of the many names of the soldiers cut into their bark. Among these old carvings Nick's attention was called to his own initials, " J. W. N.," which were probably cut by him just forty-six years before.


In the latter part of August the 12th was ordered to "the front." With what a thrill of excitement was the order received by the men ! At last their hopes of getting into a battle were to be realized! Up to this time they had had no news to write home except the details of camp life. Now they were to go far away into Kentucky, where the storm of war would soon be raging.


There was a great hurry and bustle in preparing to move taking down tents, packing luggage, and cooking three days' rations. When they boarded the train each man carried a knapsack, a haversack, a canteen, two blankets, and a gun and cartridge box. It was a long freight train that was to carry them, and some took passage in and some on top of the box cars. When it "pulled out" a long and loud hurrah was shouted by a thousand jolly fellows. Poor boys ! They little dreamed of the hardships and privations in store for them.