Fontenots of the 8th Louisiana Infantry 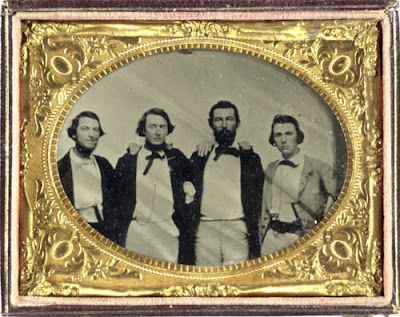 The above photo shows four brothers of Company F "Opelousas Guards" of the 8th Louisiana Infantry. The brothers are Hypolite, Denis, Alexander and Horthere Fontenot. The Opelousas Guards were raised in May of 1861 in Opelousas. Men from Opelousas, Grand Coteau, Washington and Ville Platte filled the roster of the company. Captain James C. Pratt was elected its captain and fielded 90 men. In this original muster Alexander was the only one of the above four Fontenot brothers that enlisted in May. The the remaining three brothers all enlisted in March of 1862. To read more about the war experiences of the brothers please visit Cowan's Auctions - they have provided a nice write up about these Louisiana soldiers.