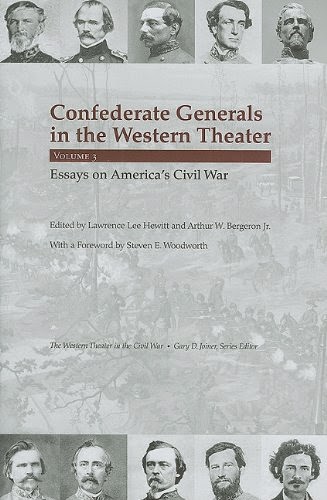 Lawrence L. Hewitt and the late Arthur W. Bergeron Jr.  collaborated and put forth three volumes on Confederate leaders in the west. I belatedly highlight Volume 3 because of an article written on Brigadier General Daniel W. Adams by Jane Johannson. The article is titled, "Daniel Weisiger Adams: Defender of the Confederacy's Heartland." This was highlighted on Johannson's blog, The Trans-Mississippian, in July of 2011...I have been busy. Johannson and I exchanged research material for several years on the brigade Adams commanded from May of 1862 - September of 1863. This brigade was the centerpiece of my book Louisianians in the Western Confederacy: The Adams-Gibson Brigade in the Civil War (2010). Her article is highlighted with several maps from my book along with one custom drawn specifically for the article on the Battle of Shiloh. I had the pleasure of reading the article and thought it was an a great piece. Another addition to chronicling the role/contribution of Louisianians in the Civil War.