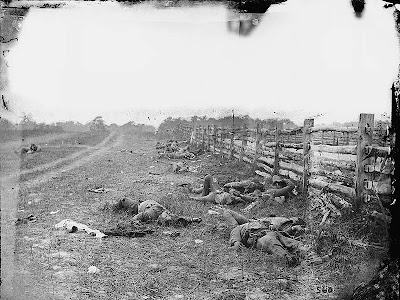 At the top of this page is an image of dead Louisianians from Brigadier General William E. Starke's 2nd Louisiana Brigade (1st, 2nd, 9th, 10th, and 15th Louisiana Regiments and Coppen's Louisiana Battalion). The image attached to this post is also another image taken by Alexander Gardner. While searching for images of Louisianians to use I came across a post on the Louisiana Civil War Message Board by Alan Pitts. In his post, Alan quotes part of a New York Times piece that was was by Ken Burns in his civil war work. Here is Alan's post:

"The dead of the battle-field come up to us very rarely, even in dreams," wrote a reporter for The New York Times.

"We see the list in the morning paper at breakfast, but dismiss its recollection with the coffee. There is a confused mass of names, but they are all strangers; we forget the horrible significance that dwells amid the jumble of type...We recognize the battle-field as a reality, but it stands as a remote one. It is like a funeral next door. It attracts your attention, but it does not enlist your sympathy. But it is very different when the hearse stops at your front door and the corpse is carried over your own threshold...Mr. Brady has done something to bring to us the terrible reality and earnestness of the War. If he has not brought bodies and laid them in our door-yards and along [our] streets, he has done something very like it."

If you click on this link it will bring you to the news article that was quoted from. The article ran on October 20, 1862 and was titled, "Pictures of the Dead at Antietam."
Posted by Stuart Salling at 2:31 PM