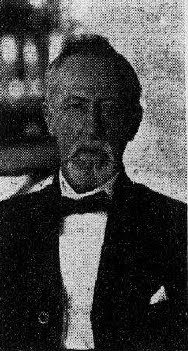 A.B. Briant
7th Louisiana Infantry, Co. B
The True Democrat out of St. Francisville, La. published an article in 1913 that recounted the trip of a Confederate Veteran to Gettysburg. The solder was A.B. Briant of Co. B, 7th Louisiana. In 1913, he was serving as the Mayor of St. Francisville and here is the story of his trip.
A Louisiana Tiger -
At Gettysburg.
Three Local Veterans Visit Celebrated Battlefield.
Hon. A. B. Briant, Mayor of St. Francisville, and a Confederate veteran I that saw as muchl heavy fighting, or possibly more than any other man in West Feliciana, has returned from the memorable love-feast, of the Blue and the Gray atGettysburg, commemorating the semi centennial of the famous battle at that place. Mr. Briant was a member of Co. B., 7th Louisiana Infantry, Hays' Brigade. He was, in fact, one of the Louisiana Tigers that charged Ripley's Battery on Cemetery Heights and captured two cannon. To revisit the scenes of that long-time-ago strife was of particular interest to him, and well did he enjoy the experience. The batteries, he says, occupy their same positions as of yore, remaining as much unchanged as well could be. It was likt reading over a glorious page of history.
Mr. Briant relates that strolling around Cemetery Heights, he was accosted by a gentlemen, who said, "Old man, were you here then?" Mr. Briant replied, yes that he was of the 7th La. which proved to be introduction enough as it transpired that it was Capt. Ripley, who exclaimed, "Then it was you who took our cannon." "Yes, but we couldn't keep them." His former enemy said, "Well, I shall capture you now," which he did, taking Mr. Briant around to enjoy all the sights and later entertained him at dinner. With many others, Mr. Briant says that his being a Louisiana Tiger was of special interest, a general from Maine asked especially to come to his tent.Mr. Briant says that the arrangements at Gettysburg were perfect, everything for the comfort of 50,000 soldiers being done without a hitch or a flaw. He and Mr. Ernest Newman, a comrade from home, had a large tent
to themselves. The food was excellent, and the water pure and cool. On the Fourth an especially good dinner
was served, although the fare at all times was fine. The streets of the tented city were as clean as constant attention could make them. Mr. Newman, who was of the party of three veterans from West Feliciana, speaks in equally glowing terms of the trip and the accommodations of every description. He left Gettysburg a little in advance of Mr. Briant, visiting Baltimore and Washington on the way home. From a letter to his son ,we quote the following bits: "The Washington Artillery is out in all its glory. Some wear white trousers and all have new suits, and- the officers with gilt braid on their sleeves." "Mr. Briant makes up the beds and sweeps, I get water and run errands. I am so sorry Mr. Lavergne couldn't come. He would have enjoyed it." "It is quite cool at
night. I had two blankets, and my coat but woke at half past three rather cool. Tried to sleep some more but our back neighbors talked so much that I could not sleep." "The Yankees that I have met are very friendly."
Dr. O. D. Brooks, Asst. Adj. General on Gen. Shaffer's Staff, La. Div. U. C.V., the third veteran whom we had the pleasure of interviewing, speaks enthusiastically of the trip and the reunion. He and Major Higgens of (Gen.Shafer's staff were together, taking rooms at F Fairview, about twelve miles from Gettysburg. He says that the attention given ;the Louisiana veterans was particularly cordial, from Federal veterans, officials and ladies alike. For himself, his hand was shaken so much that he almost got presidential hand cramp. Pretty girls willingly accepted -and wore La. Div. badges as souvenirs.
Capt. Brooks walked all- over the battlefield and made a study of the celebrated conflict which waged those hot July days, fifty years ago. The "ifs"and "might have beens" in connection~therewith speak very eloquently to the student of the battle, but to the reverent minded comes also the realization that it was all in the hands'of God, and He brought the issue, best for all concerned.
Dr. Brooks while at Gettysburg sought in vain for an old comrade from Georgia, David H. Ross, now of Minneapolis, Minn., who had been in the Union prison with him for twenty-two months at Rock Island, Ill. Mr. Ross was seeking Capt. Brooks as well, but in the vast throng they were unable to meet each other. Since reaching home he has had a letter from his old comrade. He of,the few living inmates of the Rock Island prison wear buttons made from a mussel shell, shaped into a seven-pointed star. It is a mystic
button, which was made in Rock Island prison by one of his prison mates and Capt. Brooks says it is probably
the only one left. The seven-pointed star indicated an organization of the Confederate prisoners, the letters on the seven points standing for the Latin sentence: "Dulce et decorum eat pro patria mori."
Neither of these veterans was called upon to die for his country; but for many years, as useful citizens, have
lived for their country, something just as hard to do, though less romantic. Of the thousands also that survived Gettysburg and who were spared to enjoy this reunion, each has served his country as-truly as those who paid death's toll at Culp's Hill and Seminary Ridge.

Posted by Stuart Salling at 8:49 AM