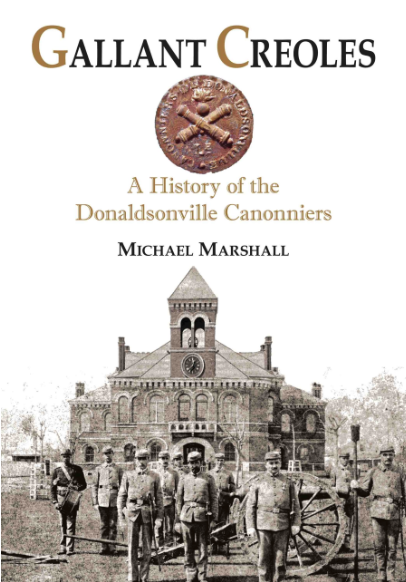 Gallant Creoles: A History of the Donaldsonville Canonniers (2013) by Michael Marshall

A link has been added to Michael Marshall's history of the Donaldsonville Canonniers on our page "Books on Louisiana Units."

Here is the write up on the book as it appears at the UL Press website (link above):

Composed of Creole and Cajun citizen-soldiers, the Donaldsonville Canonniers were originally organized as a militia company in 1837 and were one of the most active and highly regarded Louisiana units during the American Civil War. Known as the Donaldsonville Artillery during the conflict, the Canonniers were a conspicuous part of General Robert E. Lee’s Army of Northern Virginia, participating in a number of skirmishes, artillery duels, and battles, including: Yorktown, Williamsburg, Seven Pines, Seven Days, Second Manassas, Sharpsburg, Fredericksburg, Gettysburg, North Anna, Second Cold Harbor, Petersburg, and Appomattox Station. The Canonniers reorganized in July 1875 and were eventually accepted into Federal service during the Spanish-American War, before disbanding for good in November 1898.

"An obvious labor of love, Michael Marshall’s history of the Donaldsonville Battery Volunteer Artillery leaves absolutely no source unturned. . . . It is a welcome contribution to anyone’s Civil War library." --Chris Calkins, author of The Appomattox Campaign and The Battles of Appomattox

"Michael Marshall paints a detailed and intimate portrait of a group of young men who left their homes on the Mississippi River and Bayou Lafourche to try and make good on the Confederacy’s claims of independence. These rugged gunners faced the shot and shell thrown at Lee’s Army of Northern Virginia with pluck and nerve, all the while standing to their duty—and their guns—resolved to see this chore through to its end. When the smoke cleared, a battle tested remnant returned to the Pelican State confident they had done their duty.  A great story, well told."--Donald S. Frazier, author of Fire in the Cane Fields and Thunder Across the Swamp

"Thoroughly researched, rich in detail, Michael Marshall’s Gallant Creoles is a stunning tribute to a little known artillery unit from southeast Louisiana—Le Canonniers de Donaldsonville. Marshall’s mastery in chronicling the history of this colorful group of artillerists who faithfully served in the Army of Northern Virginia is a must read for any Civil War enthusiast."--Christopher G. Peña, author of Scarred By War: Civil War in Southeast Louisiana

About the AuthorMichael Marshall is a retired New Orleans Police Department detective and sergeant. He holds a bachelor’s degree from Southeastern Louisiana University. He is also a former World History and Publications high school teacher and U.S. Marine. His interest in the Civil War began at a very young age during the conflict’s centennial commemorations and family visits to battlefield parks. The proud father of two sons, he currently resides in Hammond, Louisiana, with his wife.