At the Battle of Sharpsburg, September 17, 1862, Brigadier General Harry T. Hays' First Louisiana Brigade (5th, 6th, 7th, 8th, 14th Louisiana Regiments) was subjected to a short, intense and bloody fight near Dunker Church. About sunrise the brigade was ordered out of the West Woods, across Hagerstown Pike, and into the clover field between the West and East Woods. This put Hays' small command of about 550 men in a cross fire from Miller's Cornfield, East Woods and supporting batteries from behind each Union location.

Below is the account of Captain Fred Richardson of Company F, 5th Louisiana Infantry as it appeared in the Memphis Daily Appeal, October 11, 1862: 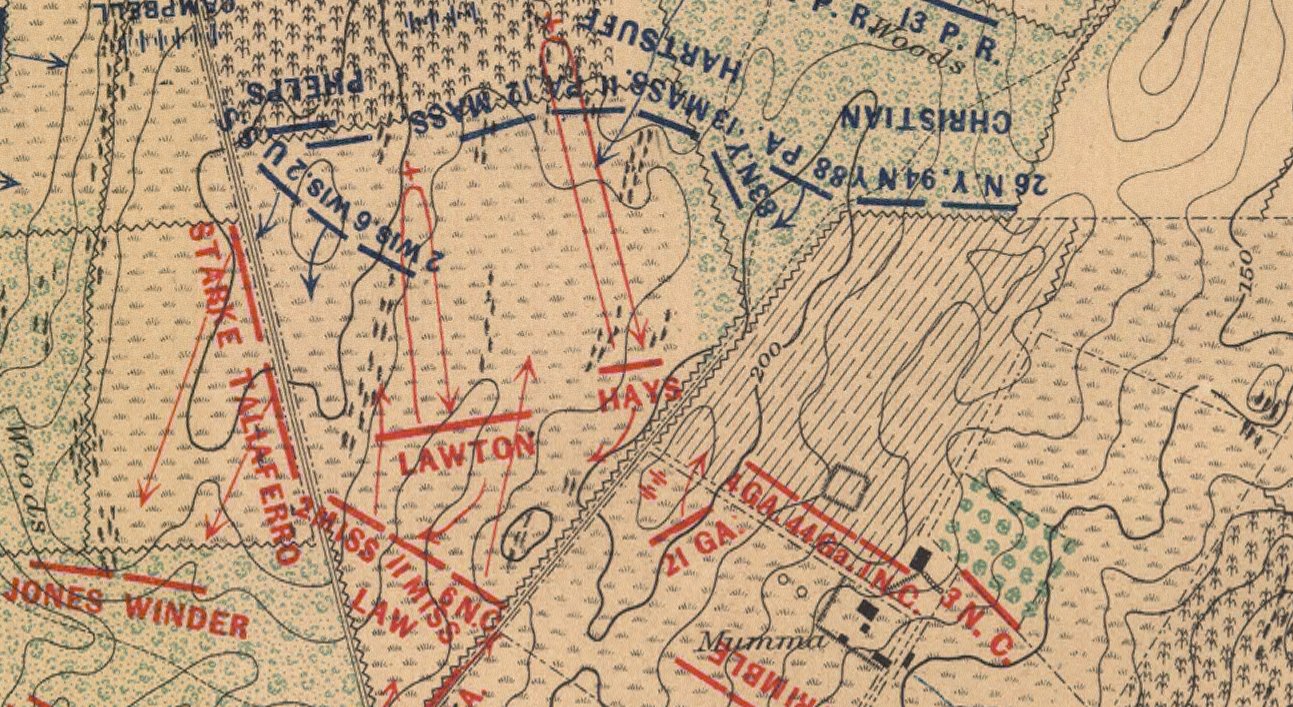 The Memphis Daily Appeal – October 11, 1862
From the Battle-Field – Loss of Louisianians
EDITOR’S APPEAL: The following is an extract of a letter from Captain Fred Richardson of the Orleans Southrons, Company F, Fifth Louisiana Volunteers, to a friend at Arcola, La., giving the casualties of the company, and also among the officers of the regiment.  We send the extract particularly for the benefit of numerous friends of our lamented friend, Lieutenant N. A. Caufield and his brother, William, many of who are residents of our ill-fated Crescent City, hoping by some chance it may reach the afflicted parents.
Lieutenant Caufield was in Richmond at the time our regiment joined the 8th brigade under Jackson, and did not join us until after our battle at Slaughter Mountain.  He participated in the subsequent fights at Bristol, also the three days battles at Manassas and the battle of Chantilly, which followed, and was present during our advance into Maryland, and at the capture of Harper’s Ferry, again crossed the Potomac, and was killed at the battle of Sharpsburg.  The circumstances attending his death are as follows:  Our brigade was ordered into a corn-field to the support of two batteries, which were firing from either flank.  Shortly after obtaining our position, the enemy’s shells came so thick and fast that General Hays ordered us to lie down.  Our c0mpany was small, and we (the officers) laid down behind it.  William, Lieutenant Caufield’s brother, was leaning immediately in his front.  Nick was reclining on his elbow, conversing with Lieut. [James] Gubbins of our camp.  Lieutenant Fitzpatrick, of Company B, by the side of him, was struck, and Nick remarked: “Fitz, you are hit.”  Many of those surrounding us were uttering exclamations of “Oh,” etc., as they were shot, when, all at once, a shell from the enemy plunged through my poor camp, passing first through the body of Willam, then cut off the leg of John Fitzsimmons, then both feet of D[avid] Jenkins, and passed through my poor friend Nick, entering at the small of the back, coming out at the breast, tearing out and exposing his heart.  I immediately jumped up, but he was beyond the possibility of being assisted.  I advanced my face close to his and called him by name, but his eyes were fixed, and he was supporting himself on his elbow in his last throes.  Oh! the anguish I feel at the sight of my poor friend, who, a moment before, was buoyant in spirits, even whilst the leaden messengers of death were dealing destruction around us, now in the hands of his Maker, and the thought rushed fast to my mind of the feelings of his poor mother and family on hearing of the loss of her two boys, the pride of her heart.  In Lieutenant Caufield we have lost a brave and efficient officer, one idolized by our company, and beloved by the officers and men of his regiment.  By the one shot I lost three killed – Lieutenant Caufield, William Caufield and John Fitzsimmons. Beside David Jenkins, who had both of his feet cut off.  The regiment went into the fight with about one hundred men, and lost in killed and wounded 57.  Our brigade suffered terribly having but 95 men in line of battle next morning.  The loss of the brigade was more than one-half.  It consists of the 5th, 6th, 7th and 14th Infantry Louisiana Volunteers and the Louisiana Guard Artillery battery, Captain D’Aquin, (late Girardey’s).  The 7th alone lost 14 officers.  Among the killed are Colonel Strong of the 6th and the Captain of Company A of that regiment besides others.  The killed and wounded officers of the 5th Louisiana at Sharpsburg are as follows:……….
Besides the above, there are others who were wounded but not disabled, viz, Captain McGuire of company B, struck four times and knocked down twice, and myself knocked down once by a piece of shell in the shoulder.
Posted by Stuart Salling at 6:00 AM