On the second day of the 2nd Battle of Manassas (August 29-30, 1862), the Brigadier General William Starke's Louisiana Brigade made history. Starke's Brigade, under the command of Colonel Leroy Stafford of the 9th Louisiana, consisted of the 1st, 2nd, 9th, 10th, and 15th Louisiana Infantry Regiments. On the morning of August 30th, the brigade was posted along the unfinished railroad bed that spanned the length of the Confederate front. In the afternoon of August 30th, Stafford's front was hit by Hatch's division. 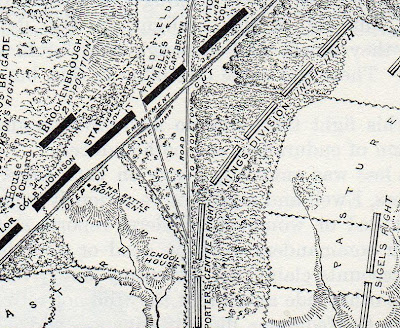 
"On the morning of the 30th Brig. Gen. W. E. Starke ordered me to send half of one of my regiments forward and occupy the railroad cut as a point of observation, to be held at all hazards. About 8 o'clock in the morning the enemy commenced throwing forward large bodies of skirmishers in the woods on our left, who quickly formed themselves into regiments and moved forward by brigades to the attack, massing a large body of troops at this point with the evident design of forcing us from our position. They made repeated charges upon us while in this position, but were compelled to retire in confusion, sustaining heavy loss and gaining nothing. It was at this point that the ammunition of the brigade gave out. The men procured some from the dead bodies of their comrades, but the supply was not sufficient, and in the absence of ammunition the men fought with rocks and held their position. The enemy retreated. We pressed forward to the turnpike road, there halted, and encamped for the night."

As Stafford's Louisianians faced intense pressure, Brigadier General Charles Field's Brigade, under the command of Colonel John M. Brockenbrough, of A.P. Hill's Division was sent to support Stafford. Brockenbrough's command consisted of the 40th, 47th, 55th Virginia Regiments and the 22nd Virginia Battalion. Below is the accout of Colonel Robert M. Mayo of the 47th Virginia and his account of Stafford's Louisianians.

The facts of the case are about as follows:
The lines of Jackson and Longstreet formed a considerably reentrant angle, and the artillery was placed on a hill just between the two corps. The Federals, in advancing to attack Jackson, were exposed for more than half mile to the fire of this artillery. Jackson's troops were in two lines - the front occupying the line of the uncompleted railroad, and the second being in a wood about a quarter of a mile or less in rear of the first. My regiment [47th Virginia] belonged to Field's brigade (of A. P. Hill's division), which was just in rear of the Louisiana brigade and the Stonewall brigade. The former was stationed at a very deep cut of the railroad, and the latter just where the cut ran out, and where there was but little protection. The cut was too deep to fight from, and the Louisiana brigade took position beyond it, behind the dirt which had been thrown out and which formed an excellent breastwork.

Reno's men, advancing under the fire of our artillery, fought the Louisianians until the ammunition of the latter was exhausted, and then drove them back into the deep cut, where they were fighting with stones, when relieved by our brigade. The Stonewall brigade, not having the same protection at the Louisiana brigade, was broken and scattered through the woods. It was then that the second line was ordered forward the
retake the position. I do not know how much more of our first line was broken, and I am confining myself to what I know of my own personal knowledge and what I saw with my own eyes. The charge of the Federals on this occasion was not surpassed in gallantry by any that was made during the war - not even by Pickett at Gettysburg. To have passed through such a fire of artillery, which almost enfiladed their line, and to have broken the Stonewall brigade, composed of troops equal to Napoleon's Old Guard, was an act of gallantry not to be surpassed by any troops of any army.

As my brigade advanced through the woods to retake the position, the minnie balls were rattling like hail against the trees, and as we debouched into the field through which the railroad cut ran, nothing could be been between us and the smoke and fire of the enemy's rifles except the tattered battle-flag of the Louisiana brigade; the staff of this was stuck in the ground at the edge of the cut, and the bridge was at the bottom of it throwing stones. About midway between the woods and the cut I received a wound in the hand; but before we reached the cut, the enemy, who had been terribly punished, commenced to retreat, or, I may say, to fly in great disorder. We were ordered to halt at the cut; but some of the command, among whom was Major Poinsett Tayloe, of my regiment with a considerable number of the men, did not hear the order, and continued the pursuit for some distance beyond. As soon as the battle was over I went to the rear to have my wound dressed, and having found the "field hospital," I slept that night with one of the surgeons under a wagon.

On the morning of the 30th Stafford's brigade was ordered up to this dangerous line, to be held at all hazards. At an early hour the enemy's activity began. Massed heavily, the Federals formed six lines of battle. Starke, to meet the expected attack, placed the brigade in the deep cut. Our artillery quickly opened fire on the enemy. Ominously silent remained the brigade. The Federals came at double-quick toward the embankment, heedless of what might be behind it. Then the rifles of the brigade awoke. Our bullets came swiftly, and from close quarters made havoc in the advancing column. Charge after charge was each time repulsed with appalling loss. While this slaughter was going on, the Louisianians began to run short of ammunition. Already some of the men were relieving the dead bodies of their comrades of cartridges. Another Federal advance, in force, came up closer than before to our position at the railroad. Company E, Montgomery Guards, First Louisiana, earliest out, first called for cartridges. Starke had already been notified by Nolan, commanding the regiment, that ammunition was running out. Directly in the rear of the Montgomery Guards was their leader, Capt. Thos. Rice. The eyes of Captain Rice, from his station on a slight elevation of the slope, moved, here, there, everywhere. Nothing but a great quantity of rock was lying around, broken in fragments of moderate size, as they had been blasted when the railroad was building. Captain Rice drew upon his experience in the Crimea. He recalled that battle with stones, fought in a rock quarry at Inkerman, close to the redan— one of the bulwarks of Sebastopol—which had now come to him like a flash, born of the need. Quick as the thought, Rice picked up a piece of rock and calling out loudly, "Boys, do as we did at Sebastopol!" hurled the first stone. Ambulance men, being idle just then, gathered stones at the word. The company, the regiment —even other commands of the brigade—followed with more stone, pelting the enemy savagely in their faces, with good aim. Excellent work was done with these rocks—a work certified to by both pelters and pelted. Some of the enemy crawled up the bank and voluntarily surrendered themselves to escape the deadly stoning.

By this time the men had warmed to the work. A fresh assault of the Federals, in formidable array, came up to the railroad. Major Barney, commanding the Twentyfourth New York, rode gallantly up to the very bank, on a fine bay horse. As he came close to it, and the horse had planted his four hoofs squarely on the embankment, the major was shot through the heart. Stone pelting had swiftly turned tragical. At his fall, his command became demoralized and fled in confusion. The bay, half dazed by the clamor, was finally captured. He was ridden by Lieutenant-Colonel Nolan, and remained with that brave soldier until his death on Culp's hill. He became next the property of Father Hubert, soldier-priest known and dear to every man in the army of Northern Virginia. Martial tradition has it that under Father Hubert the warrior bay learned to care no more for '' the battle afar off," nor recked he of "the thunder of the captains and the shouting."

While this battle of the rocks was still going on, Jackson, in response to Starke's report of the failure of ammunition, had sent word that "men who could hold their line and drive back the enemy by throwing stone could defend themselves a little longer, until reinforcements or ammunition could reach them." Jackson smiled rarely. He may have smiled, for aught we know, at this. At 3 p. m., a Virginia brigade reinforced the First Louisiana. The result was a prompt distribution to each man of twenty rounds of cartridges. Thus was fought the picturesque " Battle of the Rocks," and fought to victory.

The loss of Starke's brigade during August was reported at 65 killed and 288 wounded. Among the killed was Lieut. -Col. R. A. Wilkinson, of the Fifteenth.